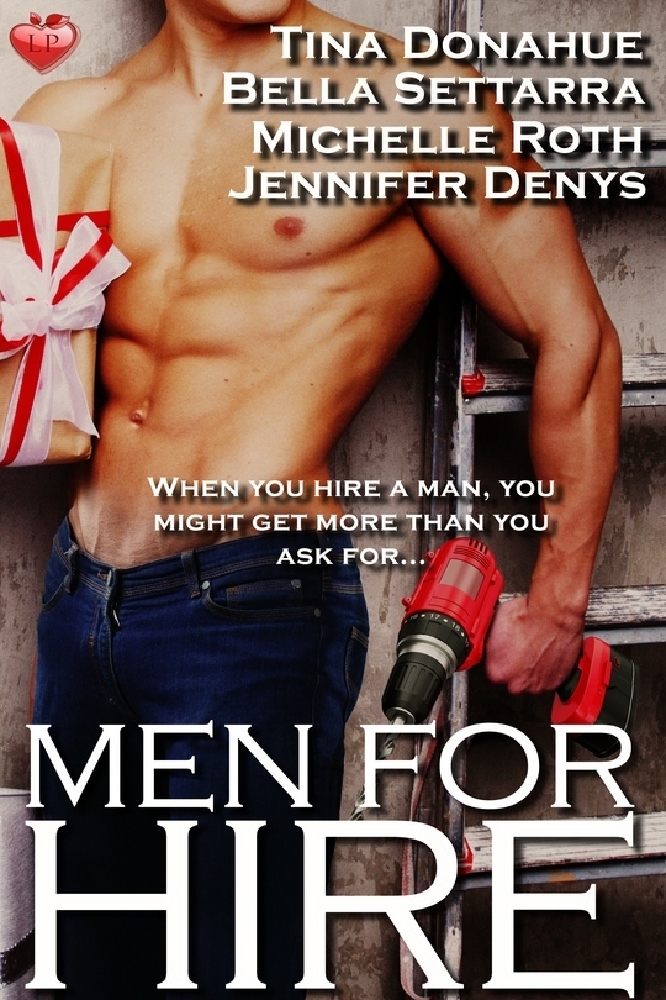 About two or three years ago I came up with the idea of a story about a firm hiring out men for any number of reasons-from house repairs, chauffeuring, dog walking, house sitting, assisting a writer, to a model for someone who knits jumpers-and put it in my folder of ideas. Then, about seven months ago I suddenly thought it would make a great anthology and put the suggestion to Luminosity Publishing, offering to coordinate any submissions.

They loved the idea and so the Men for Hire anthology was born set around a firm based in London run by Jennifer Archer. We had some great suggestions for how men could be hired and I was very pleased with the stories Luminosity and I chose.

My idea was then to do Jennifer's story ( Marital Duties) in order to bring the anthology to a close - here she was seeing several of her 'men' fall in love with their employers, and she couldn't even get sex from her own husband because he is so busy with his job. In all fairness, she also misses the intimacy that comes with a marriage, and so she completes one of her firm's job request forms pretending to hire her husband, Rob, to undertake his 'marital duties'. She meant to throw it away the following day, but her assistant sends it out, not aware it is from Jennifer…

Cue misunderstandings and some swearing…

Rob is confused, then, when he realises what has happened, he is annoyed that his wife's assistant is aware that they don't have sex, and he decides to play Jennifer at her own game and accepts the job (coincidentally, he had already booked a week's holiday, before he got the job request). His plan is to undertake various household duties - but not the one Jennifer really wants. He teases her every step of the way with snatched kisses, not long enough to satisfy, refusing to respond to her caresses, pretending to be asleep when she comes to bed because he is so tired with his household jobs.

It was fun to play with this dynamic-Rob being a little devious as he gets his own back on his wife, and Jennifer not knowing what he is up to and getting more despondent each day.

I loved changing the stereotypes-Rob is the one playing the 'I've got a headache' card; Jennifer is better at DIY than Rob; at one stage she arrives home to find him kneeling down sorting out the cupboard so she slaps his backside; she is the one who runs a business, while he is involved in a 'caring' profession; he loves gardening and cooking.

By the end, she is desperate for sex and plans to jump him at her first available opportunity. Does she get any?

Ahh, you'll have to read it and see!

I'm one of those people who don't like fixing or building things. I want someone to come in, work magic, and tell me the stuff is good to go. With that in mind, I plotted Got Muscle?, my novella in the Men for Hire anthology. I imagined poor Bree trying to put together an incredibly complicated exercise machine, mainly to get model thin so she doesn't lose her job at a beauty products company. Here she is a new transplant from New York, stuck in her cramped London apartment with no air conditioning (during a heat wave), and she's desperate to get started on her exercise routine. With zero mechanical abilities, like me, she called the service and David shows up. A total hunk and amazingly handy with tools. Yum.

I can definitely say none of the guys I've hired have ever looked or acted like David. But hey, a girl can dream. I love when a man can be helpful but also respectful. Don't want the caveman type who thinks just because he killed a spider or fixed a flat tire he can now call all the shots. Like this cable guy I had. Wow, he was a nightmare walking. Something was wrong with my service and he was fiddling with the wires and box. There was a program I wanted to see-can't recall what it was now-but I asked how long he'd take to fix the problem because I wanted to see my program. He looked at me and actually said, "You don't want to watch that. It's stupid." Like he was my daddy or something. I told him I hadn't asked for his opinion on my program preferences, but how and if he could fix the dumb thing in time.

Guys who are comfortable in their own skin and don't have anything to prove are what I'm looking for and that's how I envisioned David. Just as importantly, he's the type of man who wants a woman to look like a woman. You know, a gal with meat on her.

I think it's wonderful when a man thinks you're beautiful just the way you are. Here's another anecdote I used when envisioning David: a few years back, I was in Macy's when an older woman came out of the dressing room, modeling jeans and a tee for her hubby. His face lit up and he said, "You're so beautiful." Sweetest thing I've seen in a long, long time. She was probably in her seventies, him too, but they only had eyes for each other.

The concept of a love affair springing from a simple business transaction is one of those age-old tropes that I've always enjoyed. The main problem is that it's been done to death. When I saw the Men for Hire anthology call, the concept was so different than anything else I'd seen that I knew I had to come up with a great story. And, of course, that's where it got a little tricky.

I began to brainstorm, but I kept coming back to the same issue. Why use a service instead of going directly to the source? What I mean to say is that if a woman needed help with tax paperwork, she'd hire an accountant, not an errand service, right? If she had car trouble, she'd go to a mechanic for that. How could I write a strong female character that, at the first sign of trouble, goes running to a guy to fix her problems? The feminist in me protested! I decided that the only way it could work was if the heroine was in way over her head, with no way to accomplish the task at hand. Thus, Calculated Risk was born.

Stella Whitman is the kind of woman most would envy. She's an artist by trade, and does well for herself. She's vibrant, outgoing, and completely successful. Behind that though, she's self-conscious and flawed just like the rest of us. After a significant period of mourning her deceased mother, she finally gets around to the business of dealing with her newly inherited country home. She's shocked to find it in shambles. Instead of selling as she'd intended, she decides to repair it and move in. A recommendation for a contractor leads her to Men for Hire. Luckily Jennifer Archer has just the man for the job.

Ian Starling is a blue collar man, through and through. He's an old soul. Behind the strong and silent demeanor, though, he's always thinking. When he meets his latest client, he feels an immediate attraction to her. He's no stranger to mixing business and pleasure. The results were catastrophic so he vows never to do it again, but it becomes increasingly difficult to resist Stella, the more he gets to know her.

I made it my mission to get these two into bed in the most realistic way possible. When you've got a gorgeous but somewhat gun shy man who doesn't know if he's ready to take a chance and a woman who's in the midst of emotional upheaval, I'll just say it wasn't the easiest task. Both of them needed to take a... Calculated Risk.

I'd like to say that my story, Ménage at Meal Time, was based on a real-life event, but that's only partly true, unfortunately!

I live in a very old farmhouse in the Shropshire countryside and I do have a problem with birds dropping down the chimney as the cowl seems to have come loose. OK, that's the real part. To date, I have never had two chimney sweeps come to deal with it, and unfortunately, the old guy who usually comes out isn't anything like the men in the story. L

Given the title of the book, and the brief, I thought of a myriad occupations which could give a damsel in distress cause to call out some hunky guy (I'm hoping this will be a long series!) but it wasn't until the bird got stuck that I decided to use the idea. I hoped it was a little unusual from the scenarios most people would think of, and that just adds to the fantasy. And while we were on the topic of fantasy I let my imagination run wild and went for a ménage instead of just a couple - twice the fun!

In my story, Naomi is trying to carry on as normal while her ex is coming 'round with his new partner, Naomi's best friend, Paula. I think a lot of readers will identify with the awkwardness of the situation. This is compounded in the book by the fact that Naomi is trying to impress some potential publishers for her new novel; they happen to be friends of Paula-hence the dinner party.

Naturally, Naomi's emotions are all over the place when she suddenly realizes there is a bird stuck in the chimney of her dining room. In my case, the chimney was in the lounge, and I have a wood-burner, rather than an open fire. I could hear the manic fluttering and a feeling of dread overcame me. Knowing that the poor bird is in distress is awful, but while it's still stuck, there is little you can do to help-most readers will identify with that feeling of guilt and helplessness.

When the Men for Hire arrive, and eventually woo her with their looks, charm, and personalities-one is fun-loving and caring while the other is dominant and a little more mysterious-she can't help but fall for them. However, I'm sure we all know that feeling of uncertainty once you've had a great time with someone and are wondering if they are just going to disappear afterwards. I didn't want my men to be the 'love 'em and leave 'em' types, Naomi deserved better than that and they are the perfect gentlemen, after all.

The guys prove invaluable at the party, which is full of innuendo which adds to the humour which runs through the story, (I hope). I don't want to ruin the ending in case you haven't read it yet, but I hope it leaves readers with a smile.