The Wedding Shroud by Elisabeth Storrs 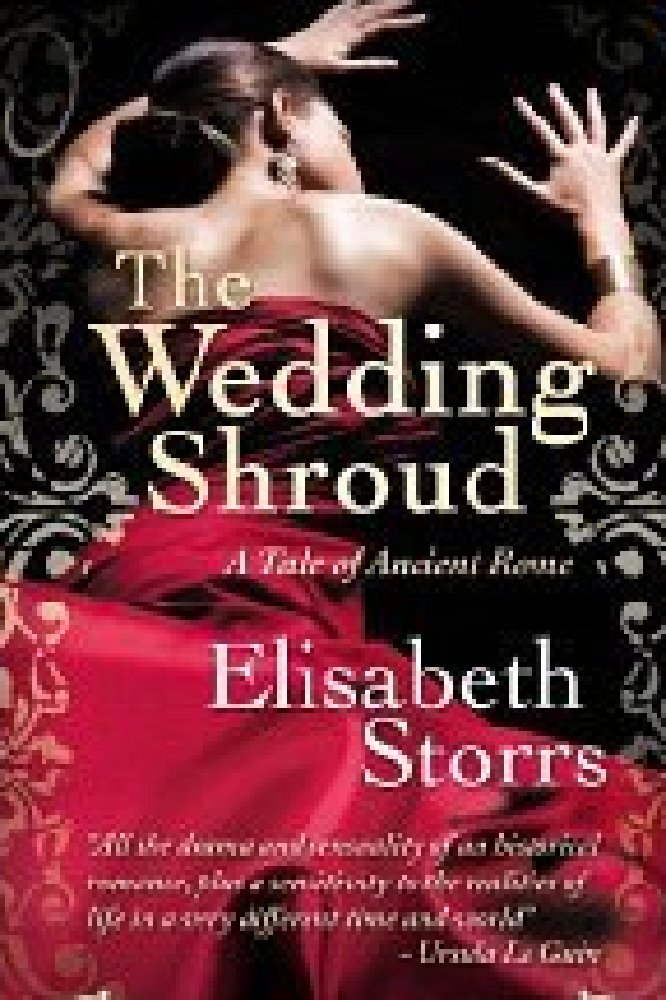 The Wedding Shroud is the first novel in my Tales of Ancient Rome series. It tells the tale of a young Roman girl, Caecilia, who is married to an enemy Etruscan nobleman, Vel Mastarna, to seal a truce between Rome and the city of Veii. These cities were only situated twelve miles apart across the Tiber River but it was as if they were from opposite worlds, so different were their customs and beliefs. Caecilia travels from an austere, intolerant and self-righteous culture into a mystical decadent society that slowly seduces her with pleasure and independence. The change also forces her to grapple with conflicting moralities especially when she discovers there are darker aspects to her husband and his people. Caecilia is a very strong character who has to overcome the constant fear of being held a hostage to war. In doing so she learns there is a difference between merely enduring compared to adapting in order to survive – and even thrive.

Tell us about your research process into the book that took over ten years.

Although my book is set in Ancient Rome, it is primarily focused on the Etruscans whose society was incredibly sophisticated compared to the early Romans. I have been researching this civilisation for over fifteen years and still continue to learn new aspects of their culture. When I first began writing The Wedding Shroud I was still raising a young family and running a consultancy business so I only found time to read history books in bed at night into the wee hours (much to my husband’s annoyance). Wherever possible I still borrow books from various state libraries through my own local library. I also find the JSTOR database to be a terrific repository of research articles from various academic journals. Google Scholar is a great source to locate relevant books as well. However, as I particularly like to use art as an inspiration for episodes in my books I’ve probably bought more Etruscan art books than I should. In the past I have kept a colour coded card system separated into notes on general history, interesting details and ideas for plot and character, but there is now a new writing program called Scrivener which keeps your research in order which I want to investigate.

You have had a long passion for history, myths and legends of the ancient world, so when did this all begin?

My love of the ancient world must be in my genes because one of my fondest memories is that of my father telling me stories about the Greek gods. As a kid, I also found a book in our house that had been handed down from generation to generation entitled The Myths and Legends of Ancient Greece and Rome by E.M. Berens. It was published in 1892. Within its pages, the lives of the fickle, adulterous deities were revealed. I discovered these beings were as flawed as mortals but their ability to bless, curse and manipulate mankind’s fate was divine. Discovering Berens was not enough, though. I wanted to read such tales in the language of those times. As a result I studied Latin at school and then Ancient Greek at university while also learning the ancient history that gave context to such literature.

The story was inspired from an Etruscan sarcophagus depicting a couple embracing for eternity, so can you tell us a little more about this?

The impact of finding a husband and wife depicted on a pre C5th BCE sarcophagus in such a way was profound. This was because in classical times women were the possessions of men. In Athens they were cloistered in women’s quarters. In Rome they were second class citizens restricted to rearing their children and household duties. What’s more, Roman and Greek women were not commemorated in death but had their ashes placed into their husbands’ or fathers’ tombs. Knowing this put into context this extraordinary sculpture and piqued my interest to discover what kind of ancient society would portray both a man and a woman in such a sensuous pose. The answer led me to the Etruscans who were reviled throughout the ancient world as being decadent, wicked and corrupt because they afforded independence, education and sexual freedom to women.

You have worked as a solicitor, corporate lawyer and corporate governance consultant, so at what point did you decide that writing was also to feature in your life?

I always wanted to write from school age but ‘life’ got in the way. I became part of the ‘sandwich generation’ squeezed between raising young children and tending to elderly parents while pursuing a career. So I set aside two to four hours every week by hiring a young babysitter to look after my sons while I wrote. In this way I was determined to follow the four ‘P’s of writing: passion, patience, perseverance and practice.

By setting aside a time, date and place in my diary I soon discovered that completing a novel was possible. I also thought about characters and plot whenever I could e.g. catching the train, walking and cooking (leading to many burned dinners) which meant that when I finally sat down at my desk the words would flow. In a way the creation of my novel was like the development of each of my boys: from a little thing, a big thing grew.

The sequel has just been released, so what can you tell us about this?

The Wedding Shroud ends when war is declared between Rome and Veii. The Golden Dice continues the story seven years later at the height of the conflict. As Caecilia has forsaken Rome for her husband’s city, she now faces both the enmity of Mastarna’s people and the hatred of the Romans who consider her a traitoress. In addition to Caecilia, two other strong female characters are introduced: Semni, a young Etruscan girl, and Pinna, a Roman tomb whore. As a result, The Golden Dice can be read as a stand-alone novel for those who have not yet read The Wedding Shroud.

Who are your favourite reads in this genre?

I love historical fiction set in any era such as those written currently by Hilary Mantel, Tracy Chevalier, Sarah Dunant, Madeline Miller and Phillipa Gregory. I particularly like Ursula Le Guin’s Lavinia (that’s why I was so excited when she agreed to endorse my book.) I also think Margaret Atwood is fantastic. My greatest influence was Mary Renault.  I remember finding The Persian Boy in the library as a naïve schoolgirl and being totally absorbed in the lavish yet brutal world that Renault rendered through her elegant prose and intense imagery.

Why is it important for fiction writers to continue to recapture the past through their writing?

Historical fiction is satisfying in so many ways. You are transported to another time and world that is completely different to your own. At the same time, you recognize that the emotions and passions that drive people’s thoughts and actions have remained unchanged.  An historical fiction reader craves knowledge as much as entertainment whether delving deeper into well-known history or being exposed to unfamiliar past times. The Wedding Shroud and its sequel, The Golden Dice, have a bit of both. Rome always holds allure because people are fascinated to understand how one tiny township could emerge to conquer and colonize the world. In addition, my novels introduce readers to the little known civilisation of Etruria.

To what extent did your discipline at university aid your writing?

Majoring in English at University helped me understand how great authors crafted their work so I could improve my own writing. I also studied history which taught me research skills. My law degree required a lot of discipline as well as the ability to analyse and order information which I’ve found incredibly useful in many areas of my life.

What is next for you?

I am currently writing Call to Juno, the third book in the Tales of Ancient Rome series. This will continue the journeys of Caecilia, Pinna and Semni in the final years of the war.