Danny Devito: Rhea Perlman And I Are 'Good'

Danny DeVito has revealed that things between him and estranged wife Rhea Perlman are 'good' following their separation last year and rumoured reconciliation.

Danny DeVito has insisted things are "good" between him and wife Rhea Perlman.

The Hollywood couple announced they were divorcing last year, but in recent months have been working at saving their 30-year marriage.

Although Danny - who has three grown-up children, Lucy, Grace and Jacob, with Rhea - won't reveal if he and his spouse are back together he has confirmed things are good between the pair.

Quizzed by BANG Showbiz about where things stood with Rhea, 64, during a media trip to London, the 68-year-old actor said: "She's good. It's good. What else you got?"

The actor - best known for his roles in movies such as 'Batman Returns' and 'Matilda' - also denied rumours he and Rhea had renewed their wedding vows in a secret ceremony last Christmas.

The 'It's Always Sunny in Philadelphia' star met Rhea in 1970 when she saw him in Broadway play, 'The Shrinking Bride', and the pair later married in 1982 before announcing their split in October 2012.

Friends including actor Michael Douglas encouraged Danny to salvage his relationship with the former 'Cheers' actress.

A source said: "When Michael found out Danny and Rhea were splitting up he told Danny he thought he was making a big mistake. Michael loves Rhea and he told Danny he will never find another woman quite like her. They complement each other perfectly and are the best of friends."

In December 2012, Danny revealed he was attempting to reconcile with his wife of 30 years, telling 'Extra': "Rhea and I are really close. Actually, still together, just separate, but together. We're working on it." 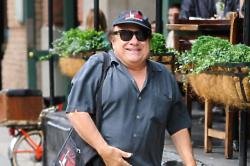