'300' actor Gerard Butler has dated a string of beautiful women but the actor has seemingly settled down with his girlfriend of seven months.

Gerard Butler has admitted he is in a new relationship.

The '300' actor played coy about his new paramour, believed to be Romanian model-and-actress Madalina Ghenea, but did reveal they've been dating for several months.

The 43-year-old actor was first linked to Madalina - who is rumoured to have previously dated Leonardo DiCaprio - earlier this year after they filmed a commercial together for disposable razor brand, Super Max.

They were spotted on a romantic date along the French Riviera in October, sharing kisses and cuddles as they took stroll.

An onlooker said: "They appeared very happy together and didn't try to hide their romance."

The 24-year-old beauty is set to appear on the big screen, landing a role in 'Don Hemingway' starring Jude Law and Emilia Clarke.

Gerard reportedly showed his support by visiting the set in the South of France.

The Scottish star's past flings are said to include Jennifer Aniston, Jessica Biel and reality TV star Brandi Glanville. 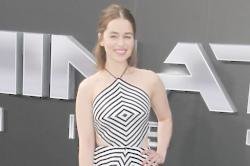