Janice Dickinson is engaged for the fourth time to Los Angeles-based psychologist Dr. Robert Gerner and is planning to get married in April

Janice Dickinson is set to marry for the fourth time.

According to TooFab.com, the 57-year-old reality TV star met her 67-year-old new fiance on a blind date in the Chateau Marmont hotel earlier this year and the couple are planning to tie the knot in April.

She said: "You just know you know it's the right person, He's the ying to my yang."

Robert proposed to Janice with a Victorian promise ring and they will reportedly shop for an engagement ring together.

The former 'I'm A Celebrity Get Me Out Of Here' star - who has been previously married three times, has a 25-year-old son Nathan and an 18-year-old daughter Savannah.

The newly engaged couple are set to host a housewarming and engagement party this evening (15.12.12) with guests including Chanel designer Karl Lagerfeld, Donatella Versace, Slash and Oscar winning actress Sandra Bullock rumoured to be on the invite list. 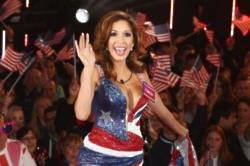 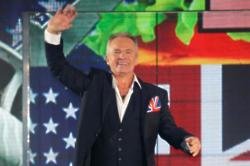 Bobby Davro: Janice Dickinson 'to be locked up'