Lara Stone and husband David Walliams stunned diners at a London restaurant by ordering a meal for their dog, who sat alongside them at the table.

Lara Stone splashed out £35 on a steak dinner - for her dog.

The 28-year-old model and her husband David Walliams shocked diners at London's Scott's restaurant when their puppy Bert was given his own seat at their table and served the medium-rare meat alongside a bowl of bottled mineral water.

A source told the Daily Mirror newspaper: "David, Lara and their dog all came in for a quiet dinner.

"Thankfully, they sat outside so as to not offend the other diners after David politely called ahead to make sure it would be OK.

"Once there, and ignoring the strange looks from fellow diners, they let the dog tuck into his own meal, just like any regular guest.

"There were a few raised eyebrows as Bert was given pride of place and waited on by the staff but then the restaurant is a celebrity hang out - they're used to handling bizarre situations."

David was also seen carrying a designer bag stuffed with treats for the dog, who was a Valentine's Day (14.02.12) gift from him to Lara.

Lara recently admitted she and David, 41, currently have no plans to have children - because her dog is so much fun.

She said: "A baby will probably never be as fun as Bert." 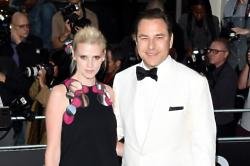 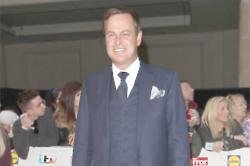