Liberty Ross has hinted that she still believes in love.

The model and actress - who recently filed for divorce from her director husband Rupert Sanders, asking for spousal support and joint custody of their children Sykla, seven, and Tennyson, five - opted to get a temporary tattoo of the word "LOVE" on her wrist at New York Fashion Week.

After chatting with actress Elizabeth Olsen, Liberty was invited to get a temporary inking and chose the word "LOVE" in capital letters.

The 34-year-old model was devastated when her husband cheated on her with 22-year-old actress Kristen Stewart after they met on the movie 'Snow White and the Huntsman' but is now trying to move forward with her life.

A source previously said: "The good thing about Liberty is that she's not upset anymore. She's had time to get over the initial shock and awe of it when it was exposed last year and the divorce was the nail in the coffin."

"That girl's extremely mature. She's handled all this public tragedy in her life with grace and humility for the sake of her children. I toast to her." 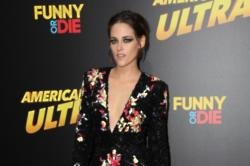