Marion Cotillard has been named Harvard University's Hasty Pudding Woman of the Year, receiving the ceremonial golden pudding pot and a parade at the institution's campus on Thursday (31.01.13).

Marion Cotillard at Hasty Pudding Woman of the Year ceremony

Marion Cotillard has been named Harvard University's Hasty Pudding Woman of the Year.

The 'Rust and Bone' actress was honoured for her contributions to film by the prestigious university's undergraduate drama society, who threw her a parade and roasted the actress in a ceremony at the Cambridge, Boston campus in Massachusetts on Thursday (31.01.13).

The Academy Award-winning French actress was adorned by men in colourful drag outfits as she took part in the parade, sitting atop a white convertible car as members of the Hasty Pudding Theatricals drama troupe followed jubilantly behind her.

Marion was given the ceremonial golden pudding pot and appeared to be enjoying the irreverent occasion, and did some fist-pumping and puckered her lips up to her award as she received it.

The 37-year-old French beauty shot to fame in 2007 with her Best Actress Oscar-winning turn in 'La Vie en rose' - a biopic on Édith Piaf - and has since starred in a string of big budget Hollywood movies including 'The Dark Knight Rises', alongside Christian Bale and Tom Hardy, 'Inception' and 'Contagion'.

She recently received a string of award nominations for her role as an amputee in 'Rust and Bone'.

Marion joins an elite club of Hollywood starlets to be given the Hasty Pudding award.

Last year's winner was 'Homeland' actress Claire Danes, while Anne Hathaway, Scarlett Johansson and Charlize Theron are among past recipients. 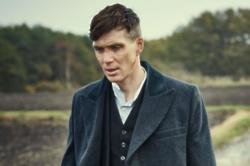