Jackson Children Under Custody of Grandmother And Cousin

Prince Michael, Paris and Blanket Jackson's grandmother has been reinstated as their co-guardian along with her grandson TJ.

Prince Michael, Paris and Blanket Jackson's grandmother has been reinstated as their co-guardian.

Katherine Jackson - mother of Michael - temporarily lost guardianship of the kids to her grandson Tito Joe 'TJ' Jackson but today (02.08.12), she and TJ were granted joint custody by a Los Angeles judge.

According to RadarOnline, Judge Beckloff said: "It's clear that the kids love Mrs. Jackson and they are very well taken care of. They also love TJ Jackson and Mrs. Jackson is doing a terrific job with the children."

Katherine's attorney, Perry Sanders, told the judge: "TJ is very respectful to his grandmother and they have all worked well together."

Perry recently said the decision to apply for joint custody has been reached in order to avoid a repeat of the drama of last week when accusations -including that Katherine had been kidnapped - were flying between warring family members.

He said: "If the court grants this joint request, it will eliminate concerns such as the ones triggered by the events of the last few days. It will also empower TJ to take joint legal responsibility for certain day to day duties such as the management of household personnel, including security.

"It will also make clear for school personnel and anyone else coming into contact with the children that TJ can act on their behalf. TJ has frequently attended school conferences and dealt with school related matters and this agreement, if approved by the court, allows for continuity as sanctioned by the court." 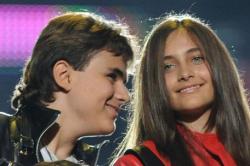