Sarah Jessica Parker was slammed by ex-boyfriend Rob Lowe and former co-star Bradley Cooper when they appeared on UK chat show 'The Graham Norton Show' together.

Rob Lowe and Bradley Cooper have teamed up to "defame" Sarah Jessica Parker.

She was p***ed. She was like, 'Look, I can't believe you don't remember my eyes are blue.'

The Hollywood stars revealed they are not fans of the 'Sex and the City' actress after both had run ins with her in the past and used their appearance on UK chat show 'The Graham Norton Show' to publicly bash her.

Rob - who has previously dated Sarah - explained the actress was unhappy with his recent autobiography 'Stories I Only Tell My Friends' because he failed to mention her eyes are blue in it although she didn't tell him directly and instead asked a third person to inform him of his error.

'The Hangover II' actor Bradley - who co-starred with Sarah in both 'Sex and the City' and the movie 'Failure to Launch' said his time on set with Sarah was not pleasant as he was warned not to put his tongue in her mouth during a kissing scene.

He explained: "Sarah Jessica Parker, to keep defaming her, she had a third party say to me, 'Don't put your tongue in her mouth.'". 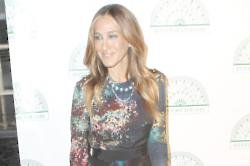