The 'Bel Ami' actress - who gave birth to her third child on July 15 - has finally revealed her baby girl has a staggering five names but is known as simply Luna.

A spokesperson for the actress told US Weekly: "I would like to announce Uma and Arki's daughter's name for the first time officially: Rosalind Arusha Arkadina Altalune Florence Thurman-Busson, better known to family and friends as Luna."

The baby is the first child for the 42-year-old actress and her financier boyfriend, Arpad Busson, 49 but the 'Kill Bill' star was already mum to daughter Maya, 14, and son Levon, 10, from her previous marriage to Ethan Hawke.

Prior to Luna's birth it was reported that Uma and Arpad - who also has two children, Arpad Flynn Alexander Busson and Aurelius Cy Andrea Busson from a previous relationship with supermodel Elle Macpherson - knew they were expecting a baby girl and the couple celebrated their impending new arrival with a pink elephant-themed baby shower in New York in May.

Uma and Arpad first got together in 2007 but later split in November 2009. They reconciled last year and the actress recently gushed that she has finally found a "happy" place.

She said: "I have something I would really like to express about my love life. I'm happier with it now than I've been in many, many years. Yes I'm trying to have as peaceful a personal life as possible."

Uma was received a special honour from her co-star Robert Pattinson at the Elle Women in Hollywood event on Monday night (15.10.12). 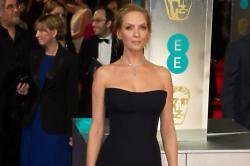 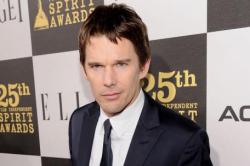