Sean 'Diddy' Combs has revealed that he collects tea sets in a surprising new interview.

The 46-year-old rapper - who founded his own label Bad Boy Entertainment in 1993 - revealed his surprising hobby in a chat with Us Weekly for their '25 Things You Don't Know About Me' section.

Diddy - whose relationship with Cassie Ventura is reportedly on the rocks after a recent row - also called himself a "hopeless romantic".

The father-of-six, sons Quincy, 25, Justin, 22, and Christian, 18 and daughters Chance, 10, and twins D'Lila and Jessie, nine, also revealed a number of quirks, including "If I don't have a fresh haircut, I really feel incomplete" and "I eat applesauce with every meal".

He also had high praise for Naomi Campbell and Nelson Mandela.

He said: "Naomi Campbell is like a sister to me," and "The most impressive and inspiring person I've ever met in my life was Nelson Mandela."

And before he found fame as a rapper, Diddy revealed he "once worked as a doorman at a Marriott hotel".

Meanwhie, the star was recently forced to postpone his upcoming tour due to a shoulder injury.

The rapper was due to kick off the Bad Boy Family Reunion Tour in Columbus, Ohio on August 25 but has pushed it back to September 1 in Chicago so that he will have more time to recover from a recent surgery.

His spokesperson said the delay will give him "the much needed time he needs in order to recover and give fans the incredible stage experience they have come to expect from a Puff Daddy production". 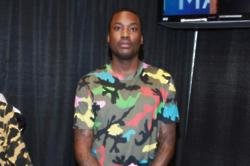