Frank Ocean's producer says his new album 'Boys Don't Cry' has been delayed because he wants it to be perfect.

Frank's first full-length major label album since 'channel ORANGE' in July 2012 was initially expected to be released in July 2015 but the release date has been pushed back several times and producer Malay insists that Ocean wants to ensure it is perfect.

In a Reddit AMA interview, he said: "It's about making sure the perfect aesthetic for the situation has been reached, to do that takes constant tweaking, trial and error ... That goes for any creative [situation]."

He also claimed there had never been an actual release date for the record, saying: "Never heard of an actual date ... Then again I don't pay attention to a lot of stuff."

Earlier this month, fans were left disappointed when the new release failed to materialise.

Fans were teased about the release of the new album when Apple Music hosted a livestream with Ocean, featuring him working in a woodworking shop. The livestream was never specifically linked with the release of his album but atmospheric music could be heard throughout, with reports that it could be snippets from his latest LP. 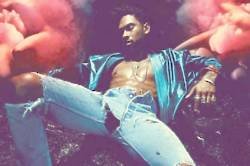