Diana Douglas Webster, mother of Hollywood actor Michael Douglas, has passed away following a cancer battle at the age of 92.

Michael Douglas' mother has died at the age of 92. Diana Douglas Webster - the first wife of Michael's father Kirk, 94 - passed away on Saturday (04.07.15) at the Motion Picture and Television Home (a retirement community) in Woodland Hills, California following a battle with cancer.

Her husband Donald A. Webster announced the sad news.

She was a noted actress, who, along with working on TV shows including 'The West Wing', also appeared in over 20 movies.

In 2003, Diana played Kirk' wife in 'It Runs in the Family'. Michael and his son Cameron also appeared in the film.

Kirk and Diana met at the American Academy of Dramatic Arts in New York before marrying in 1943. Michael was born the next year and their other son Joel, a producer, followed in 1947.

A memorial service will be held in Los Angeles, according to Variety. 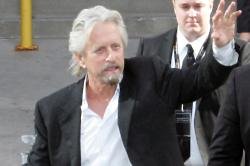 Michael Douglas Too 'Lazy' to Be a Director