The 'Before I Go To Sleep' star enjoys a long soak every night as it helps her to relax, and she enjoys her cleansing sessions even more if Keith jumps in the tub with her. 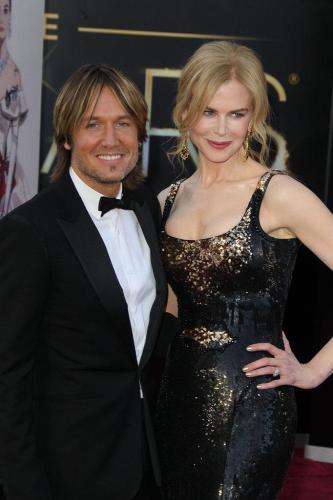 Nicole Kidman has revealed she and her husband often take romantic baths together.

She told the new issue of PEOPLE magazine: "I like lavender baths. It helps me to sleep. Keith and I have been known to take baths together, many times. It's so nice, we squeeze in!"

The Australian actress - who has two daughters, Sunday, six, and Faith, three, with the country singer - also ensures takes very good care of her skin and uses sun block everyday as she used to love having a tan when she was younger.

She said: "I wear full rashies [UV sun protection shirts], a hat, sunscreen. I do not let myself get burned because I have such fair skin, but I used to burn so badly that I'd blister."

The 47-year-old screen idol is currently filming 'Genius' with Colin Firth and Jude Law and admits she was very nervous on the first day of rehearsals.

Asked about the last time she felt embarrassed, she said: "I just did the first day of rehearsals for a new film, 'Genius,' with Colin Firth and Jude Law, and I had to get up and pretend I could act. I am always embarrassed on the first day and feel like I'm bushing from head to toe."