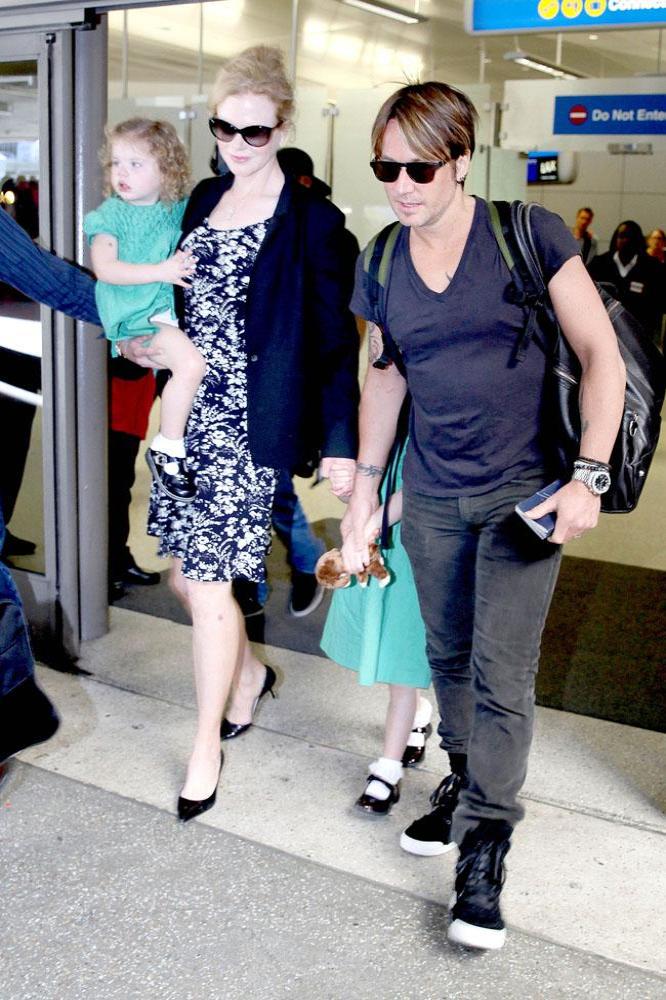 Nicole Kidman and Kieth Urban with their daughters, Sunday and Faith

The 47-year-old actress has four kids - an adopted daughter and son, Isabella, 21, and Connor, 19, from her failed marriage to Tom Cruise, and daughters Sunday, six, and four-year-old Faith with her husband Keith Urban - but admits she would love to take her brood up to eight, even if her mother disagrees.

When asked if she wants more kids, she replied: "I have four children already and my sister has six children so my mum's like, 'We're done. We're done.'

"If I could I would have four more."

While Nicole makes sure Sunday and Faith are kept grounded by giving them chores to do, the 'Paddington' actress admits she doesn't ever iron clothes or cook but makes up for it with her love of washing garments, admitting she can't get enough of seeing dirty water come out of her outfits.

She added: "I don't do the ironing, even though as a kid that was my number one chore at home. Ironing my dad's shirts, which I loved doing.

"Sunday and Faith both have their chores that they have to do every single day even though they groan about it.

"I certainly do my things. I love washing clothes. I do love it, I love watching the dirty water come out. I sound so OCD. I just love seeing them get clean.

Nicole admitted she and Keith will be "holding tight to each other" over the festive period as she remembers her late father, Dr. Antony Kidman, who died in September aged 75, and she believes the couple have endured such a great marriage because they met later in life.

Speaking on ITV's 'Lorraine', she added: "We've been married eight years and together for nine. We work really hard to keep a relationship alive and to keep it incredibly deep and intimate.

"That's through meeting in later life and having lived a life and coming together at a particular time that was serendipitous.

"There are incredible possibilities for love in the latter years. I sound like some old woman. Like a grandmother. Anyway, it's good and I'm grateful.