Bradley Cooper has been dropped from the line-up of a U.S. sports show after football bosses complained over gambling references in his new movie, sparking fury from film boss Harvey Weinstein.

The Hangover star was due to appear on The Rich Eisen Thanksgiving Special on America's NFL Network to discuss his latest film Silver Linings Playbook as well as the holiday sporting fixtures.

However, his interview has been cut from the programme after bosses at the sports channel, owned by the National Football League (NFL), objected to movie's references to gambling.

Robert De Niro, who stars as Cooper's onscreen father, plays a part-time bookie in the film.

The move has drawn criticism from movie mogul Weinstein, whose The Weinstein Company is behind Silver Linings Playbook.

He says, "We are deeply disappointed in the NFL's decision, and we are quite frankly surprised. Pulling a pre-taped interview with our stars is nothing short of censorship... (Silver Linings Playbook) is not a film about gambling in the NFL. It's a film about fathers and sons and football bonding a family together".

The Rich Eisen Thanksgiving Special will feature appearances from other stars including Mad Men actor John Slattery and The Simpsons' Hank Azaria. 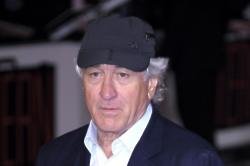