Ageing actress Candice Bergen was hesitant about signing up to star in the new Broadway revival of GORE VIDAL's the Best Man because she feared she wouldn't be able to remember her lines after suffering a minor stroke in 2006.

I had no confidence in my memory

The Boston Legal star, 65, has finally admitted to the health crisis ina candid interview with New York Magazine, six years after her publicistdismissed the health crisis reports and insisted high blood pressure wasthe cause of a hospital stay.

Bergen reveals her memory is "not quite the same" since the incident, and she feared it would fail her if she agreed to take on the gruelling theatre schedule for the political play.

She tells the publication, "My concern with theatre was no retakes. I had no confidence in my memory".

Bergen eventually agreed to take on the part of Alice Russell, joining a cast including Broadway veterans James Earl Jones and Angela Lansbury, but her nerves got the better of her as the first day of previews loomed.

She says, "The closer it got, the more I thought, 'What have I done? I'm going to go out and make an a**hole of myself!' Now, I am so grateful that I did it".

Gore Vidal's The Best Man began previews at New York's Schoenfeld Theatre in early March (12), ahead of its big opening on 1 April (12). 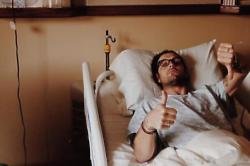