bosses over his firing from hit sitcom Two and a Half Men last year (11), and Sheen returned the favor by appearing at the Beverly Hills Bar Association bash in California on Wednesday (18Apr12).

Sheen was a surprise speaker at the event, which crowned Singer entertainment lawyer of the year, and he roasted his pal with a series of explicit gags.

He told the audience, "Marty might be the only person who has f**ked more people than I have... A lot as been said about my past. But trust me, I never s**ewed a hooker as hard as Marty s**ewed Warner Bros. I've got 100 million reasons to say thank you".

Funnyman Tom Arnold hosted the event and poked fun at his own legal troubles with ex-wife Roseanne Barr, joking to the crowd, "My wife was a walking lawsuit. There were a lot of billable hours in that crazy b**ch".

Hollywood actress Sharon Stone was also among the speakers and she joked about her famous crotch-flashing scene in 1992 movie Basic Instinct "You call Marty because you need someone like Mike Tyson in the Holyfield fight, when he bit his ear off.

"Marty is such a bad ass motherf**ker... IfI had known him back when I was making Basic Instinct, I could have gotten Marty Singer to take that scene out of the movie".

A number of Singer's other famous clients were in the audience, including John Travolta and his wife Kelly Preston, Priscilla Presley, and Arnold Schwarzenegger, who took part in a video tribute to the attorney along with fellow Hollywood tough guys Bruce Willis and Sylvester Stallone. 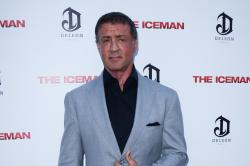