Country legend-turned-movie star KRIS KRISTOFFERSON grew so tired of JOHNNY CASH failing to record songs he sent him, he personally delivered one to his Nashville, Tennessee home - by landing a helicopter on his lawn. Kristofferson first met Cash when he was a janitor at Columbia Records, where the late singer/songwriter recorded many of his hits - and his mentor encouraged the wannabe to send him his tunes. The ME & BOBBY McGEE hitmaker did this for many years, but Cash never recorded anything. Kristofferson recalls, "I probably knew him for three years before I landed the helicopter on his lawn. "I'd given him any song I ever wrote and he always was encouraging but he never recorded any of them. "For a brief time I was in the National Guard, flying helicopters, and I took one of the helicopters to deliver a tape to his house. I was lucky he didn't shoot me out of the sky."

Music mogul RICK RUBIN was shocked the first time he met JOHNNY CASH in 1993, because the late country legend was playing a gig in a dinner theatre. Producer Rubin ended up signing Cash to his American record label and is widely credited with revitalising the fallen star's career.

But he admits he was devastated to see patrons ordering food as they watched Cash perform at the Orange County, California, venue.

Rubin, who met Cash backstage that night, says, "As he was singing you could sit there and order your meal. I think many people thought his best work was behind him.
"But when I got there, I started to feel nervous. He was the Man In Black. I guess it was the mythology." 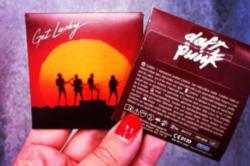 Daft Punk Get Lucky At the Grammys