Oscar winner Marcia Gay Harden is about to fulfil a high seas dream - by christening a new cruise ship.

It's a big deal because this is my city, where I grew up, and I get to bash champagne bottles against the ship

The actress will launch the Carnival Cruise Dream Ship on the Hudson River in New York next week (12Nov09) and she can't wait for the champagne ceremony.

The excited star tells Wenn, "It's a big deal because this is my city, where I grew up, and I get to bash champagne bottles against the ship.

"My dad was a naval captain and got to travel all over the world. He was stationed in Europe for a long stretch and he decided we would come back to America on a cruise. We came back and stopped in Hawaii and it was awesome.

"At that time those cruise ships were like dinosaurs compared to what cruise ships are like today with water slides and spas... It's a great wayfor families to be together and to bond together. I have been on a cruise with my family and it's beautiful being under the stars on the ocean".

And Harden is particularly pleased to be the "godmother" of the new Carnival Cruise ship - because it's going to be a floating charity boost for St. Jude's Children's Hospital.

She adds, "They're going to raise $3 million for these kids and they also have innovative ideas for families on the ship to take part in games together to raise money. It's great across the board because it raises awareness, it raises money and also families will be having a good time". 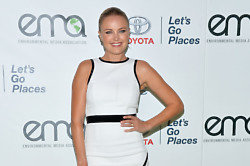