The woman who allegedly punched Matthew Fox in order to "protect" herself during a scuffle in Ohio on Saturday (27Aug11) has filed charges against the actor.

The Lost star had attempted to board a party bus in Cleveland when he was confronted by driver Heather Bormann because his name was not among the list of guests.

A scuffle ensued and Bormann insists she had no choice but to strike the actor because he allegedly attacked her first.

She claimed, "(Fox) leaned in and started punching my crotch and breast. I took one hand to his jaw and he was spitting blood.

He stumbled backwards. This was my self-defense. This was the only way I could protect myself... from a man beating up on a woman."

Fox was detained by police after the encounter, although not formally arrested - but on Tuesday (30Aug11), Bormann filed assault charges against the star, according to CNN.

Cops in Cleveland are investigating the incident and city prosecutors have photographed the injuries Bormann alleges were inflicted by Fox. 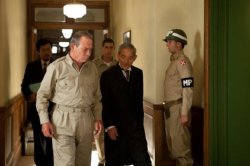