Tom Cruise remembered his Top Gun filmmaker as a "creative visionary" and a "dear friend" in a statement released on Monday (20Aug12), and now the actor's ex-wife and Days of Thunder co-star Nicole Kidman has also expressed her heartache over the loss.

He was a man's man who lived life as hard and as full as anyone I've ever met, but there was always a sweetness to his toughness

She says, "I'm so so sad. I loved Tony and he was always so good to me. He will be deeply missed by so many of us that knew him".

Travolta, who starred in Scott's action thriller The Taking of Pelham 1 2 3, tells Eonline.com the filmmaker was "one of my favourite directors I've ever worked with", while Crimson Tide veteran Gene Hackman mourns the loss of "a wonderful, creative talent".

Revenge star Costner says, "Tony was one of the good guys. He was a man's man who lived life as hard and as full as anyone I've ever met, but there was always a sweetness to his toughness. He was truly in love with his profession, and he is already missed".

Former child star Dakota Fanning, who featured alongside Denzel Washington in 2004 thriller Man on Fire, admits she is struggling to express the depth of her pain.

A statement issued by the young actress reads "It is difficult to find the right words to express the sadness I feel. I had the privilege of working with Tony on the film Man on Fire and that experience helped to shape the actor and person I am today. "Tony was a visionary with an adventurous spirit and a huge heart.

I will never forget your kindness to me and I will always cherish our memories together.

My thoughts and prayers are with his family, especially his wife Donna and their two sons". Val Kilmer, Christian Slater, Patricia Arquette, Keira Knightley and Brigitte Nielsen have also paid their respects to the late director. 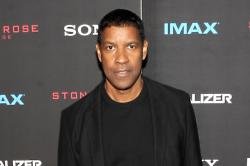