Scarlett Johansson has won over New York's tough theatre critics and pulled in a slew of positive reviews for her second stint on Broadway, with many comparing her to Hollywood veteran Kathleen Turner.

The Avengers actress, who won a Tony Award for her Broadway debut in Arthur Miller's View From the Bridge, returns to the stage in a new production of Tennessee Williams' classic play Cat On A Hot Tin Roof.

She tackles the role of Maggie 'the Cat', made famous by Dame Elizabeth Taylor in the 1958 movie adaptation, and a host of famous faces turned out to see her perform at the play's opening night on Thursday (17Jan13).

Scarlett Johansson turns in a nifty turn as Maggie, finding humor and barely hidden desperation in her role as frustrated wife and mother-to-be

James Bond star Daniel Craig and his wife Rachel Weisz were in the audience at Manhattan's Richard Rodgers Theatre, along with pop star Nick Jonas and actor Victor Garber, and Johansson managed to win over even the most notoriously tough critics with her performance.

Ben Brantley of the New York Times writes, "Ms. Johansson, like Maggie, seems to possess a confidence that can turn raw nerves into raw power... She is perhaps too forthright to be truly feline... but Ms Johansson confirms her promise as a stage actress of imposing presence and adventurous intelligence. Quibble all you want about the particulars of her performance. She obviously has a strong sense of what she wants to do here and the convictions to follow it through". 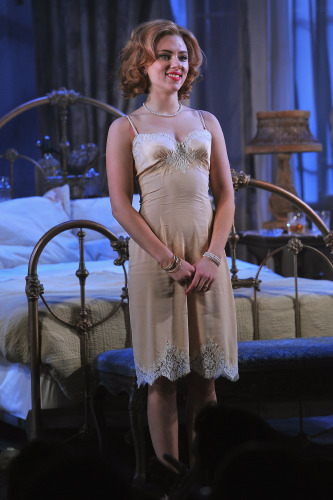 Mark Kennedy of Associated Press adds, "Scarlett Johansson turns in a nifty turn as Maggie, finding humor and barely hidden desperation in her role as frustrated wife and mother-to-be. She's less overtly sexy than other actresses who have played the ironic role, making her Maggie more cerebral, angry and proud".

Elisabeth Vincentelli of the New York Post compared the 28-year-old actress to "a young Kathleen Turner", writing, "Johansson didn't pick the easiest vehicle for her second Broadway appearance... While her performance often lacks nuance and starts off too shouty, the star eventually gains in confidence. Spitting out Williams' florid lines in a low-throated growl reminiscent of the young Kathleen Turner (herself a Broadway 'Cat' in 1990), Johansson successfully brings to the fore Maggie's rough edges".

Brendan Lemon of the Financial Times also compares Johansson to husky-voiced Turner, who won a Tony Award nomination for the same role in 1990.

He writes, "Johansson delivers a Maggie with a whisky voice. The huskiness comes as a surprise in one so young, and cues us that her voice may be headed the way of Kathleen Turner's".

What The Critics Said:

'[Johansson's] sophomore Broadway performance isn't as fully integrated as the one she gave in "Bridge"; there are a few miscalculations in her take on Maggie. She is perhaps too forthright to be truly feline, and for a poor but well-brought-up debutante, her accent is strangely common. But Ms. Johansson confirms her promise as a stage actress of imposing presence and adventurous intelligence. Her Maggie is, as she must be, an undeniable life force and - as far as this production, directed by Rob Ashford, is concerned - a lifeline... Ms. Johansson is also the only major player in 'Cat' who appears to have a fully thought-through idea of the character she's portraying.' Ben Brantley, The New York Times

'Scarlett Johansson turns in a nifty turn as Maggie, finding humor and barely hidden desperation in her role as frustrated wife and mother-to-be. She's less overtly sexy than other actresses who have played the ironic role, making her Maggie more cerebral, angry and proud. Benjamin Walker, as her husband Brick, is slow to boil but savage when he does, a former athlete turned into a languid hunk of beef who sits on the edges of the stage avoiding conversation and hiding in a bottle. They have little chemistry at first - but that's kind of the point.' Mark Kennedy, Associated Press

'Somebody spayed the cat. And it wasn't the hard-working main attraction Scarlett Johansson, who plays Tennessee Williams' tenacious feline title character in Cat on a Hot Tin Roof. The star and her similarly marooned fellow cast members are all at the mercy of Rob Ashford, a director out of his depth and reaching for any floatation device he can grab in this sinking Broadway revival, which manages to be both thunderously emphatic and curiously flat.'
David Rooney, The Hollywood Reporter

'Scarlett Johansson...unlike so many young movie stars, she has no problem expanding her performance chops to the live theater, booming out a character that has been precisely forged and defined but ill-advisedly contained... a clear point of view is absent in this generally confused, low-stakes and halting production - that went through changes and subtractions in its preview period and now seems stuck. It's neither a traditional staging nor a suite of fresh ideas on a great American drama that should both embody timeless interpersonal truths and reflect how much our world is changed, sexually speaking, in little more than a half-century.' Chris Jones, The Chicago Tribune