Anne Hathaway, Dominic Monaghan and Seth Green are among the stars who have offered up memorabilia for an auction in support of an orangutan charity.

The Devil Wears Prada star has signed a script page from her fairytale film Ella Enchanted, along with her castmates Joanna Lumley and Minnie Driver, which will be donated to Sumatran Orangutan Society's auction on eBay.co.uk.

Green has offered up an autographed T-shirt promoting his 2009 movie Old Dogs, while Monaghan has given signed photographs.

Other sale items include a signed record from Jason Mraz and artwork from Coldplay's album Viva La Vida.

Supporter Lumley says, "I really love orangutans and met many of these majestic animals when filming in Indonesia.

"The most thrilling thing in my life was looking into the eyes of a mother orangutan with a baby on her back I knew her and she knew me... It is our duty to do all we can to save them and their way of life".

The sale will raise funds for the charity's conservation work. 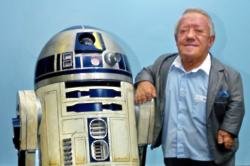