U.S. President Barack Obama cancelled his meeting with critically-ill Nelson Mandela in South Africa on Saturday (29Jun13) at the request of the former leader's family.

The civil rights icon was hospitalised in Pretoria for treatment relating to a recurring lung infection on 8 June (13), and last week (begs24Jun13) Mandela opened his eyes for the first time in days after learning Obama was planning a visit to his bedside during his tour of Africa.

However, the American politician decided to forgo the meeting at the last minute "out of deference to Nelson Mandela's peace and comfort and the family's wishes," and instead sat down with the 94 year old's relatives in Johannesburg.

Paying tribute to Mandela, affectionately known as Madiba in South Africa, during a joint press conference with South African President Jacob Zuma, President Obama said, "Our thoughts and those of Americans and people all around the world are with Nelson Mandela and his family and all of South Africans.

"The struggle here for freedom, Madiba's moral courage, this country's historic transition to a free nation has been a personal inspiration to me, an inspiration to the world, and it continues to be".

According to President Zuma, Mandela remains in critical but stable condition, adding, "We are hoping that he is going to improve. With all the prayers and good wishes that have been made, everyone is wishing Mandela well.

"The doctors who are tending to him are doing everything (they can) - these are excellent doctors. We hope that very soon, he will be out of hospital". 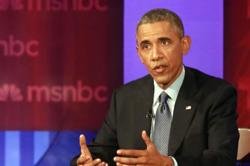 Barack Obama to appear on Running Wild With Bear Grylls