So how do you get the people behind it?

The Oscar-winning star, a keen environmental campaigner, headed to Brussels, Belgium to promote Trashed, his documentary on the effect of global waste, and he took to the podium at the European Commission to talk to bureaucrats.

Speaking alongside the E.U.'s environment commissioner Janez Potocnik, Irons gave delegates his ideas on how to reduce waste and increase recycling rates.

Afterwards, he told Reuters, "Brussels is a bubble. Every now and then it burps and out comes a bit of legislation. So how do you get the people behind it?... (Increased global waste is) a growing problem and yet it's a problem that's curable". 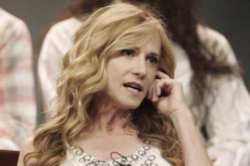