Rupert Everett, Sheridan Smith, Imelda Staunton and Michael Ball were the toast of the London theatre scene on Sunday (17Feb13) after picking up the lead acting prizes at the 13th annual Whatsonstage.com awards.

Everett picked up the Best Actor in a Play award for his role as Oscar Wilde in The Judas Kiss, while Quartet star Smith took home the Best Actress honour for Hedda Gabler.

Staunton and Ball won the Best Actress and Actor in a Musical gongs for their roles in last year's (12) Sweeney Todd, which also claimed the Best Musical Revival award and a Best Director prize for Jonathan Kent.

Meanwhile, former Spice Girls star Melanie Chisholm landed a Best Supporting Actress in a Musical honour for her role of Mary Magdalene in the touring production of Jesus Christ Superstar.

Her co-star Tim Minchin picked up the male equivalent.

Other winners included Stephen Fry, who claimed the Best Supporting Actor in a Play award for his portrayal of Malvolio in Twelfth Night, which won Best Shakespearean Production; The Bodyguard, which was named Best New Musical, and the National Theatre's The Curious Incident of the Dog in the Night-time (Best New Play). 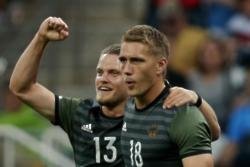