Let the mud-slinging begin when the raucous comedy The Campaign arrives on to Blu-ray and DVD on 21st January 2013.

When long-term congressman Cam Brady (Will Ferrell, Anchorman, Blades of Glory) commits a major public gaffe before an upcoming election, a pair of wealthy CEOs plot to put up a rival candidate and gain influence over their North Carolina district. Their man: naïve Marty Huggins (Zach Galifianakis, The Hangover, Due Date), director of the local Tourist Information Centre.

At first, Marty appears to be the unlikeliest possible choice but, with the support of his new benefactors, played by John Lithgow (3rd Rock from the Sun) and Dan Akroyd (Ghostbusters); a cut-throat campaign manager, Dylan McDermott (American Horror Story); and his family’s political connections, he soon becomes a contender who gives the charismatic Cam plenty to worry about.

As election day closes in, the two are locked in a dead heat, giving rise to escalating mud-slinging, back-stabbing and all-out war between the pair, with hilarious consequences...

Directed by Meet The Parents director Jay Roach, this riotous comedy contains belly-laughs-a-plenty thanks to stand-out performance from kings of comedy, Ferrell and Galifianakis, and a stellar supporting cast.

tagged in The Campaign 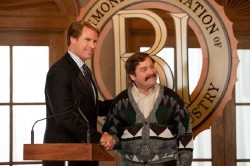 The Rise Of Will Ferrell & Zach Galfianakis 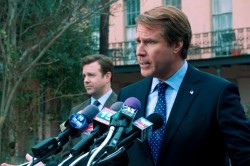