The model revealed she and the son of legendary musician Bob Marley are considering tying the knot in Ethiopia, where the Rastafarian movement was founded.

She told Brazil's Veja magazine: "Rohan told me we have to return to the roots so the marriage will last forever."

This will be the third wedding for the 28-year-old model - who has two children from her first two marriages - while Rohan has two kids from his first marriage to Geraldine Khawly and five others with singer Lauryn Hill.

Rohan, 39, who runs the Marley Coffee company, met Isabeli shortly after he separated from Lauryn last year following the revelation that she was expecting a child with another man.

However, Isabeli's mother Maribel, admitted she is concerned about the wedding plans.

She said: "I think everything is happening too fast but everything has a different rhythm with Isabeli."

It has also been claimed the couple "see each other very little" because Isabeli continues to live in Sao Paulo, Brazil while Rohan lives in New York. 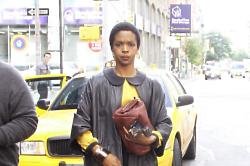