Narciso Rodriguez is the new ambassador for Woolmark.

The American fashion designer - who counts Hollywood actresses Katie Holmes and Rachel Weisz as fans - will be the fashion ambassador for the 'No Finer Feeling' campaign and has committed to using responsibly sourced merino wool in his next two collections.

Woolmark is a trademark Australian Wool Innovation (AWI), promoting the ethical use of wool in fashion. Garments bearing the Woolmark logo are considered to conform to the organisation's rigid standards.

Narciso told WWD: "I've historically used wool as the core of my collections. This collaboration happened quite naturally. I'm a true believer in wool and have been cutting wool on the bias since I was in school."

As well as incorporating merino wool into his designs, the New York City-based designer - who has styled US First Lady Michelle Obama in the past - will aid in the creative direction in the campaign's adverts and take part in educational seminars.

The $20 million AUD campaign has previously attracted top designers such as Vivienne Westwood, Alexander Wang, Giorgio Armani and Marc Jacobs, who carry the Woolmark logo on their clothing. 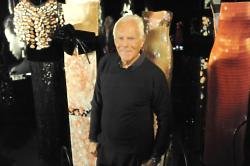