Nicolas Ghesquiere is leaving his role of creative director at Balenciaga after 15 years in a "joint decision".

The fashion house's creative director and the brand have made a "joint decision to end their working relationship" after 15 years, with Nicolas departing on November 30.

Francois-Henri Pinault, chairman and CEO of PPR who own Balenciaga, said: "Cristobal Balenciaga was a master, a genius whose avant-garde vision dictated fashion's greatest trends and inspired generations of designers.

"With an incomparable creative talent, Nicolas has brought to Balenciaga an artistic contribution essential to the unique influence of the house."

A successor has yet to be announced.

Nicolas has been widely credited with bringing the brand huge levels of commercial and industry acclaim and Kristen Stewart is just one of his celebrity fans.

The 'Twilight Saga' star said recently: "I had to have a relationship with fashion from such a young age - you walk down the red carpet, and it matters. It's strange.

"At first I just wanted to get it right, I wanted it to be smooth sailing and just to be able to do my job.

"Then I did a photo shoot with Nicolas and it was the first time that taking photos in high fashion felt like telling a story, that it was part of a concept - it wasn't just about something on the surface, it really evoked a feeling." 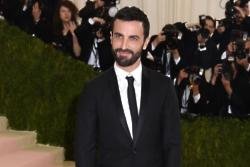