Photographs of Kate Moss when she was just 18 years old have gone on sale for $2,500.

Limited edition photographs of Kate Moss taken when she was 18 years old have gone on sale for $2,500 each. The black-and-white snaps, shot by photographer Stephanie Pfrieder Stlander, taken from the 41-year-old model's first editorial shoot with Italy's Harper's Bazaar in 1992 are being sold at stephaniepfrienderstylander.com for the hefty sum.

The shots were captured against various backdrops around New York City - including an old subway car, a graffiti wall in SoHo and the iconic World Trade Center - alongside male model Marcus Schenkenberg, according to DuJour.

In one shot, Kate struts her stuff in a black figure-hugging dress down the side of a busy road with her luscious locks wafting in the wind behind her.

Another sees the stunner perched on a leather sofa in fishnet tights as she rests her flawless forehead against her perfectly manicured hand, while gazing into the distance.

Other images include close-up head shots of the starlet as she rocks chunky black shades and caresses her face.

Meanwhile, over the span of her 27-year career, Kate - who was discovered at just 14 years old - has become one of the world's most in-demand and highest-paid supermodels.

And the blonde stunner, from Croydon, shows no signs of slowing down as she continues to star in campaigns for Rimmel, Burberry, Calvin Klein and Chanel. 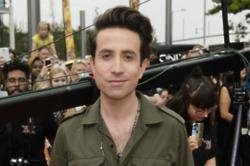 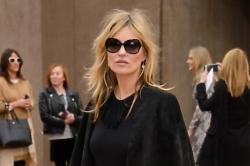