Benjamin Walker is back on the big screen this week as he takes on the role of Abraham Lincoln in Timur Bekmambetov's new movie Abraham Lincoln: Vampire Hunter.

Forget a stuffy biopic pic this is the U.S. President as you have never seen him before... yes he is kicking some vampire ass in a bid to avenge the death of his mother.

During his career Walker has split his time between movie and theatre roles but he made his big screen debut back in 2004 when he appeared in Kinsey.

The movie was a biopic movie about Alfred Kinsey, a pioneer in the area of sexology, and Walker played Kinsey in his younger years.

He went on to appear in Unconscious and the Clint Eastwood war movie Flags Of Our Fathers, which was based on the book of the same name by James Bradley and Ron Powers.

The movie was about the Battle of Iwo Jima in the Second World War and Walker took on the role of Corporal Harlon Block, one of the six men who famously raised the American flag on the island.

During the time that he was establishing himself in movies he continued to work in the theatre starring in the likes of Inherit the Wind and Les Liaisons Dangereuses.

He has returned to the role many times since then and it has been a performance that is always met with rave reviews.

But to star in the show Walker turned down the role of Hank McCoy aka Beast in Matthew Vaughn's X-Men: First Class.

Since the he has worked on movie projects such as The War Boys and Coach but this week he is back in the biggest movie role of his career to date.

Walker is set to lead the cast in Abraham Lincoln: Vampire Hunter as Bekmambetov bring the Seth Grahame-Smith novel of the same name to the big screen.

When Abraham Lincoln's mother is killed by a supernatural creature, it fuels his passion to avenge her death.

Statesmen by day, hunter by night, President Lincoln sets out to crush vampires and their slave-owning helpers.

And Walker has plenty of projects in the pipeline as he has already completed work on Wolfe With An E, which is directed by David Louis Zuckerman.

He is currently working on Muhammad Ali's Greatest Fight, which is about the boxer's fight with the US government.

Walker is set to take on the role of Kevin Kennedy in the movie alongside Christopher Plummer, Danny Glover and Frank Langella.

Tweets of the Week: #ripthegreatest 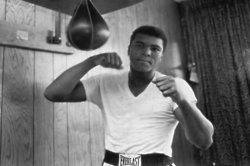