If Hollywood can offer medals of courage on screen, somebody should nominate comedy star Anna Faris for its highest honor possible.

With What’s Your Number?, her special brand of blonde ambition figures large as why she is now at the top of the celebrity game by taking lead in her sexy first romantic comedy...ever.

As executive producer of her latest effort, the sexy romp What’s Your Number?, is not wasting any time in finding the projects that suit her career now.

Now married to actor Chris Pratt, she is the first to admit that she is truly enjoying this new phase of her life. As for work, sure, she’s still game to join the boys’ club of questionable taste with such films as Waiting and Observe and Report.

But, the beauty of Faris is how her natural charisma does wonders to the rom com genre. No matter the outcome, this simply adorkable girl remains absolutely genuine and accessible. And that persona extends quite nicely off-screen, too, as revealed in this exclusive new interview.

- You’ve been really involved with What’s Your Number?

That’s right.  I’m more powerful. [LAUGHS] It’s exciting.  The script was brought to me before it was set up at a studio.  I loved it.

It was the funniest script I had ever read, so we brought it to New Regency and I came on as an Executive Producer.  I was involved in casting and interviewing directors. They asked my opinion about a lot of things.

- Why were you surprised that the project was brought to you?

I had never really done a romantic comedy before. I get offered roles that are crazy and broad. They don’t seem like very real characters. This seemed like a very grounded character. It was such a strong script. It was just flattering.

- Women are certainly not shying away from the type of comedy usually reserved for men. Why are we enjoying such a great time for women in comedy today?

I mean, Bridesmaids? Women pooping in the streets!  The world’s their oyster now.  [LAUGHS] It’s a really exciting time for women in comedy.

When I would pitch projects to studios, the first questions were always like, 'Well, is it R?  And if it is then we can’t have it be R. Also is this character lovable?  Are we going to fall in love with this girl?'

It puts so much pressure on your performance.  It’s like, 'Alright, you can’t be flawed.' That really limits your comedic world. I had a look initially that I wanted to present as Ally. I wanted her to be a little chunky and a brunette, just sloppy.

She was unemployed, wore tennis shoes and sweatshirts. But there was a lot of disagreement about that part. I understand that it’s fun to wear like nice clothes and nice heels.

She has a rich mom, so that was how we justified her Prada shoes. But, I’m yearning to play these sloppier characters and to play characters that are just real and relatable.

- Are you more of a jeans and t-shirt kind of girl?

Yes, as evidenced by my sweatshirt I brought.  My publicist was like, 'You’re going to wear that sweatshirt?'  Yes, and my flip-flops.  I took off my heels.  I’m down to my dog-chewed flip-flops.

- Truth time for that unavoidable question on everybody’s mind. Exactly what is your number?

What’s my number?  All right, well, what’s your number?  [SILENCE] Okay, well, then maybe we’ll get back to it later on. [LAUGHS]

- Do you think it is important to know a person’s number?

It’s so complicated. I feel it’s more important to a woman what a woman’s number is to themselves, rather than what a man really thinks about it.

I think it’s kind of a question of youth, really. It’s a question that young people ask themselves a little bit more. As you get older you realize that nothing good can come of this line of conversation. It’s unfortunately a conversation that I think that we’re still having, though. Why?  Is this archaic?

Why do we still feel guilty about sexual experiences or do we?  I don’t know.  I think there’s always like, 'I don’t know if I should have done that.'

It’s part of growing up.  It would be a shame I guess if I didn’t question some things, if I felt amazing about every experience.

- Ally has a struggle with watching the life of her sister reach that mighty milestone: getting married. Do you still have the need to plan out a certain type of future?

I did when I was younger.  You know, by age 25 I’m going to be a movie star.  Maybe they’ll be spoof movies! [LAUGHS] I personally had a plan set out.

I wanted to be married before I was 30 and I wanted to have kids in my early 30’s.  I had the structure set out and it hasn’t really gone as planned.

- Do you feel it somehow went wrong?

I feel really happy with where I am right now with my personal life. That’s something that maybe women really do nowadays, saying, 'Okay, here are the goals. Here are the things I need to achieve before a certain amount of time.'

Part of that is maybe related to our biological clock and the pressure we put on ourselves to do things before it’s harder for us to have children. It’s unfortunate.

- Your husband Chris Pratt is one of the many men Ally dares to revisit in her quest to right the Mr. Wrongs of her past. Was it a lot of pressure having your husband on set?

Yes!  It was pressure in the way that I was really nervous to act in front of him because I respect him so much. It feels really intimate.

I guess it’s like letting your partner read what you’ve written a little bit.  It’s all right if strangers judge you, but if your husband or partner judges you, then that’s tough.

- And here you are, getting down and dirty with Chris Evans. Any flare ups of jealousy?

I wanted him to be a little jealous of like my relationship with Chris Evans, but that didn’t happen.  In fact, they became like best friends! I was the third wheel! It was so frustrating.

For once maybe two men would be like fighting over me and it didn’t happen! [LAUGHS]

- The film does go through some very revealing lengths for a laugh. How was it having to work in your underwear?

So painful.  It was awful! We did the basketball scene and the jumping in the water scene and some of the other naked scenes pretty late in the film.

We’d all been working together so hard for so long, all the crew. We’d all become really close. I still kind of clung onto like producer.

I’m not just the actress, I’m also a producer and so for them to suddenly see me in my underwear was just so humiliating.  I think I lost all credibility. [LAUGHS]

- Film is a permanent record. For life. Did you prep for the nude scenes?

Thanks for reminding me!  I think that the larger issue for me personally would really terrify me way too much if I actually thought about the final product. I kind of have to live in the moment.

Some actors can.  Some actors look at all the playback and they are really concerned about making sure they’re touched up or whatever. If I start thinking too much about that stuff, I’ll just go crazy.  I’ll want to run away.

I already do want to run away. You have nice body makeup and hopefully nice lighting and then you just play basketball in your bra and panties. I’m not a very disciplined person, but you kind of have to watch what you eat.

Actually, doing The House Bunny was the first time that I really forced myself to get into shape for a movie. I learned a lot from that which is annoying.  Apparently I can’t eat pizza on set all day long.  Give me those raw almonds.  I’m crazy about them. [LAUGHS]

What's Your Number is released on Blu-Ray & DVD 30th January 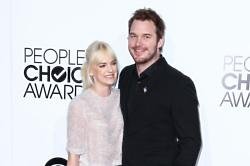