Anne Hathaway was "surprised" to learn she was to play Catwoman in 'The Dark Knight Rises' because she was expecting a different character.

The brunette beauty admits she had to "change gear" following a meeting with director Christopher Nolan because she had been convinced she was going to portray Harley Quinn.

Anne didn't expect Catwoman and her alter ego Selina Kyle to feature in the story because the character is so strongly associated with Michelle Pfeiffer, who played her in 'Batman Returns'.

She said: "I found out during my sit-down with Chris, which was about a two-hour meeting, that at the end of the first hour it was going to be Selina Kyle, Catwoman, which surprised me. I didn't think that he was going to go there.

"I was just so convinced that it wasn't going to be Catwoman, that I kind of had another character in mind that when he told me it was Catwoman, I kind of had to switch gears immediately. I was thinking Harley Quinn."

However, Anne then went on to realise the director wasn't afraid to tackle characters from previous movies, having previously cast the late Heath Ledger as the Joker in 'The Dark Knight'.

She added to MTV News: "[Pfeiffer's performance] was so iconic and so beloved.

"Then I guess, [Jack] Nicholson's Joker was the exact same way, and Chris didn't have any fear with that, and obviously, Heath did the most extraordinary job with that. I don't know why it didn't occur to me." 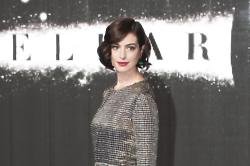