Blake Lively has called the sex scenes that she shot for her new movie The Savages as 'awkward'.

The actress teams up with Taylor Kitsch and Aaron Johnson in the new movie which is directed by Oscar winner Oliver Stone.

Speaking to The Hollywood Reporter the actress said: "It's really not as exciting as it looks on screen.

There's crew members and then there's these naked men walking around. It just makes for an awkward environment."

The movie sees Lively take on the role of O, the shared girlfriend of Kitsch and Johnson, in her first movie since Green Lantern last summer.

2012 has seen Lively mix her movie work with TV as she returned to the role of Serena in Gossip Girl. 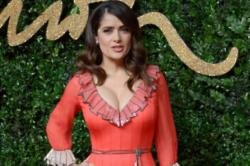 Dolly Parton: 'I get more credit than I deserve...

Man in a cave gets vaccinated as soon as...