Charlize Theron loves waking up with a sense of fear because she is nervous about working on a challenging movie.

Charlize Theron likes to wake up every day with a sense of fear.

The actress - who recently adopted a baby boy named Jackson - admits she loved working on 'Prometheus' and particularly enjoyed the nerves she had about being able to play the role of Meredith Vickers.

"Nothing's kinda like, 'I can do this with my eyes closed' and I think that is ultimately what every actor wants, something that challenges you to that point."

She also admits she was inspired by Tilda Swinton's Oscar-winning performance in 'Michael Clayton' to play an early scene.

She added to BANG Showbiz: "You know there was this amazing performance that Tilda Swinton gave in 'Michael Clayton' and [director] Ridley [Scott] and I were talking about how when you see her, she doesn't say anything in the beginning of that film, the first time you see her. The kind of panic that is instilled in her says so much without her ever having to say anything. And I said it'd be great if we could come up with something like that." 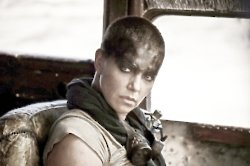