Hilary Swank has filmed a documentary with the American Cancer Society to remind women to put themselves - and their health - first.

The Million Dollar Baby star created a short film called Choose You to shed light on the dangers of cancer and what steps can be made to minimise one's chance of falling victim to the deadly disease.

We looked at so many wonderful women and their stories

During an appearance on U.S. morning show Today on Thursday (19May11), she says, "We looked at so many wonderful women and their stories.

"They are just extraordinary. And we follow them around and we talk about the things you can do (to prevent cancer)...

"It's challenging because you don't really know what you can do to prevent it but we do know that eating well, exercising, getting screened and not smoking (help).

"And when you hear the statistics that one in three women will be diagnosed (with cancer) in their lifetime, I mean that's significant".

And for Swank, the project is very near and dear to her heart. She adds, "My grandfather died of breast cancer.

"My grandmother (died of) breast cancer, and my aunt (had it too).

"(Cancer) is very prevalent in my family. It's close to home for me.I think it is for most people. Everyone is touched by it somehow".

The documentary, which is backed by Swank's production company 2S Films, is set to debut online next month (Jun11). 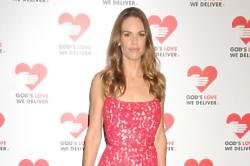