Kirsten Wiig to Star in Anchorman 2

Kristen Wiig is to star in 'Anchorman: The Legend Continues'.

The 'Bridesmaids' actress has inked a deal to appear in the long-awaited sequel, though details of her role have not yet been announced.

Though Kristen's role hasn't been confirmed, she was previously speculated to be joining the movie as a love interest for Brick Tamaland (Steve Carell).

Producer Judd Apatow recently said Adam and Will Ferrell - who portrays lead character Ron Burgundy - have written a hilarious script for the sequel, but were trying to keep it secret for as long as possible.

He said: "Adam McKay and Will Ferrell wrote it, Adam McKay directs it and they came up with the most hilarious script.

"We read it a few weeks ago and people were laughing so hard that at about 40 minutes in we all just ran out of gas. It was hard to read the whole thing because we got tired [from laughing].

"I've never seen anyone delight in playing a character than Will acting like Ron Burgundy all day. He's just so happy doing it it's infectious.

"I can't give it away because it's more secret than the next 'Star Wars.' All I can say is that there are no Wookies in it. But it's top-secret."

'Anchorman: The Legend Continues' is set for release on December 20. 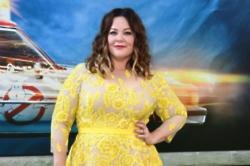