Every year there is an indie movie that comes along that gets you all excited - well in 2012 The Words could be that movie.

The movie marks the return to the big screen of the rather lovely Bradley Cooper and he is joined by an all star cast that includes Zoe Saldana, Olivia Wilde, Jeremy Irons, Dennis Quaid and Ben Barnes.

The thriller marks the directorial debut of Brian Klugman & Lee Sternthal as they team up to bring their own screenplay to life.

The film follows struggling writer Rory Jansen (Cooper) who faces a dilemma when he discovers a lost manuscript - does he pass it off as his own?

He decides to publish under his own name but she soon pays a high price for stealing another man's work.

The Words is released later this year. 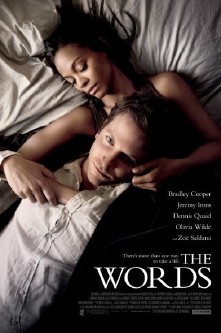