The teenager and and Australian actress Danielle MacDonald will portray two young friends imprisoned for murder at the age of 11.

Berg's film, Every Secret Thing, will pick up the pair's story seven years after their conviction.

Announcing the casting on Thursday (07Feb13), the film's producers state, "Upon their release, children start to go missing; as the police turn their attention to the duo, the mystery surrounding the original murder comes back to light".

Diane Lane will play Fanning's mother in the film, while Elizabeth Banks will portray a police officer. 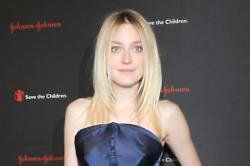