Jai Courtney "cringed" when he was told he'd be playing Captain Boomerang in 'Suicide Squad'.

Courtney is set to play the fictional supervillain George "Digger" Harkness aka. Captain Boomerang in the highly anticipated comic book film but he's confessed he was slightly sceptical when director David Ayer first told him about his character.

The Australian star shared: "I hadn't read a script at all when I signed on. We'd met on a couple of occasions and we'd spoken. And, to be honest, when he told me that the role of Captain Boomerang was what he was thinking, I kind of cringed. Cause I wasn't a comic book kid. I wasn't familiar with the DC universe and the history of that. So I knew nothing about it. And I was like, 'Oh, God, Captain Boomerang, really? I really don't know how Australians will react to this'."

However, after learning a bit more about his character and the movie itself - which also stars Jared Leto as The Joker, Will Smith as Deadshot and Margot Robbie as Harley Quinn - from the 'Fury' filmmaker he's now excited about seeing the end result.

He told SpotlightReport.net: "And It's funny, 'cause something like that you want to do right. And it's been interesting finding the balance. But he's [Ayer] the perfect guy to have on your side, because you look at some of the comic books and some of the old '60s stuff is so hammy, you know, and kind of camp. But, get a guy like David Ayer at the helm of a thing like this and it really gets kind of dark and gritty, and, you know, awesome. And he's a stickler for authenticity. So I think what we're going to create is going to be really, really cool." 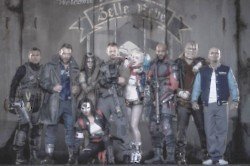