'The Lego Movie' sequel has been delayed. The animated follow-up to the 2014 film was expected to hit cinemas in May 2018 but Warner Bros. has decided to push back the release date by nine months meaning the eagerly-anticipated flick won't open on the big screen until 2019.

The film was initially expected to be directed by Phil Lord and Christopher Miller but 'The Mindy Project's Rob Schrab will now take over the reins, according to Deadline.com.

Although they've stepped down as directors, Lord and Miller are reportedly still on board to act as producers and are also co-writing the forthcoming film's script.

'The Lego Movie 2' will follow on from 'The Lego Batman Movie', which features the voices of Will Arnett and Mariah Carey, when the latter hits cinemas on February 10, 2017.

Safekeepers for the Lego screen brand Dan Lin, Lord, Roy Lee and Miller will produce the 'The Lego Batman Movie', while 'The Lego Movie's animation supervisor Chris McKay has been brought on board to direct the spin-off.

Skilled writer Seth Grahame-Smith has also penned the script for the movie, having recently been announced as the screenwriter for the much-anticipated 'Beetlejuice 2'.

Meanwhile, 'The Batman Lego Movie' isn't the only spin-off lined up for the foreseeable future as a Ninja-themed film called 'Ninjago' will also follow on September 22, 2017. 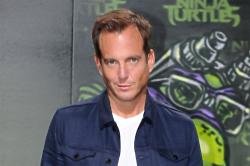 Will Arnett Has New Romance