Mia Wasikowska has revealed the 'Stoker' cast tried extra hard to have fun in between the scenes to counteract the eerie atmosphere of the film.

Mia Wasikowska says the atmosphere on the 'Stoker' set was surprisingly cheerful.

The 23-year-old actress claims she had a blast hanging out behind the scenes with her co-stars Nicole Kidman and Matthew Goode because the mood of South Korean director Park Chan-wook's Gothic thriller was so dark and disturbing they needed to counteract it with humour.

She revealed during a press conference: "I've often found on the films that have a more serious nature, the more light-hearted and silly and goofy it becomes in between the scenes out of necessity to counter the intensity of the scenes and material. I felt like we were pretty good at that!"

The film, penned by 'Prison Break' star Wentworth Miller, depicts the twisted tale of lonely teenager India Stoker (Mia) whose life is altered after her father's death when her mysterious Uncle Charlie (Matthew) worms his way into both her and her emotionally unstable mother (Nicole)'s lives.

Asked whether she thought actor Wentworth's script was any different from the average screenwriter, she replied: "No, I think a good script is just a good script. I thought it was amazing the first time I read it and was instantly drawn into this world. And these really complex characters and the mystery within all of them."

'Stoker' is released on March 1. 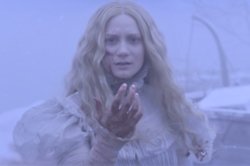