Ricky Gervais knows he's written a "good" joke when his partner warns him off it.

The 55-year-old funnyman - who has been in a relationship with author Jane Fallon for 33 years - has admitted he has no desire to stop working because he loves working on new material so much, despite being warned not to utter his one liners in public by his spouse.

Asked why he keeps working, he said: "I love it. There's nothing as good as when I'm on a plane or going for a jog and my phone's not ringing... when I can think.

The 'Life on the Road' star doesn't care what people think of him so long as they're not making up lies, although he "quite likes" getting verbal abuse online.

He told Red magazine: "I don't mind what people say about me as long as it's an opinion or the truth.

"Do you know what I mean? It's a very subtle point, but my feelings aren't hurt with how people feel about me...

"Reputation is what strangers think of you and actions are what you really are. It's taken me a long time to realise that. So now, outside of libel or physical threats, I don't care. In fact I quite like it." 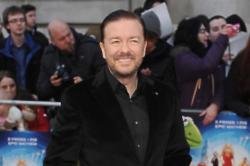 Ricky Gervais: Oscar Wilde Would Be Trolled on Twitter