Airing at the end of the month, the MTV Video Music Awards always bring us a lot of entertainment, and that's surely going to be no different this year when Miley Cyrus takes up proceedings as host.

Of course though what it all boils down to is who walks away with the prestigious prizes from the event - here are our predictions for the main awards on the night.

VIDEO OF THE YEAR

We think Ed should and will walk away with this prize! Though his video is a lot simpler to many of those he's nominated with, it's got a real elegance and charm to it that makes it one of the most memorable the year has seen.

For much of the same reasons listed above, Ed should also take home the Best Male Video prize! It'd make no sense if he took Video of the Year but nothing in this category, when nominated alongside some of those who are also up for both awards.

Sia pips everybody else to the post for us with this one. Bringing some brilliant artistry to the business, she challenges her audience to think about the messages she's trying to convey, rather than just popping up a video she knows will be an instant and generic success. That being said, we wouldn't mind Nicki walking away with this one, either.

Nicki has to take this one! The Queen of Rap managed to break records with 'Anaconda' and deserves to be rewarded accordingly. She's managed to blur the lines between hip hop and other genres brilliantly and continues to shine in not only her lane, but others as well.

It's gotta be Mark and Bruno for 'best pop', the song snatched the radiowaves for months on end and continues to do so, and the video sits perfectly alongside it. Great choreography with an old school feel, and it looks like it would have been a hell of a lot of fun to film!

Hozier - 'Take Me To Church'
Fall Out Boy - 'Uma Thurman'
Florence + the Machine - 'Ship To Wreck'
Walk The Moon - 'Shut Up and Dance'
Arctic Monkeys - 'Why'd You Only Call Me When You're High?'

Not enough good can be said about Fall Out Boy and the inventive ways in which they continue to shun rock stereotypes and instead go their own way. This video proved that they're still able to poke fun at themselves and address social issues at the same time - notice the tank crushing a truck with the letters 'Article 1, Section 36.03' written on the side: a reference to Alabama's ban on issuing marriage licenses to same-sex couples.

It's gotta be these three ladies! The video was so much more than we ever expected - rather than just getting the three lipping to camera, we got a high budget piece that included a helicopter flight and some catchy choreo.

Who are you pulling for at this year's MTV Video Music Awards? Let us know! 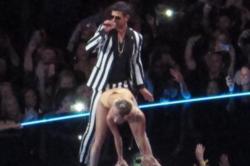 Britney Spears Will Make An Appearance At The VMA's 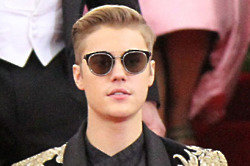 Justin Bieber Will Sing At The MTV VMA's