Lawson have returned with the brand new music video for latest single 'Roads' - the first cut from their forthcoming new album.

Recorded in Nashville at the world-renowned Blackbird Studios, the song sees Andy Brown, Ryan Fletcher, Joel Peat and Adam Pitts come together once more, maturing as artists and as a band with a track that's unlike those that have come before it.

Directed by James Slater, the video sees Andy running through a wild and rugged landscape, trying to get away from himself with dramatic cinematography alongside heartfelt and well-crafted lyrics.

Speaking about the new track, Andy said: "It was important for us as a band to come back with something fresh and exciting. Roads feels like a step forward, and explores addictions people can go through. The writing and recording process at Blackbird Studios in Nashville allowed us to test ourselves and try new sounds and directions. We're really proud of it".

Full details surrounding their upcoming album and live shows are to be announced in the coming weeks and months. 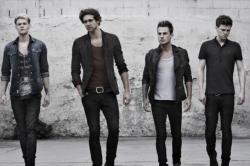