Chantal Claret might have made her name in Morningwood, but now she’s back on her own with a stonking new album in the shape of The One, The Only…

With the album finally getting a UK release on April 1st, we spoke to the singer about the new sound, Topshop and Beyoncé’s Super Bowl half time show.

To start off with, what can people expect from The One, The Only…?

It’s a mix of upbeat 60s music, a dance party, love songs and a big booty bass. It’s got songs about love and death, girls and boys, parents, cheating. There’s a lot going on!

This album’s sounds totally different to your Morningwood music. Is this album more representative of you as an artist?

A hundred million per cent, this is really where my heart lies. I tell everybody that I think if you’re a singer, you should sing what you like to sing in the shower, because that’s the true testament as to what you really enjoy singing. This is what I grew up listening to and at a certain age, you tend to gravitate towards a style of music and you just can’t enough of it. You start doing research on it and you can’t stop listening to these bands and with me that was the sixties.

Be it garage bands or girl groups, the British Invasion or blue eyed soul, I could not get enough of it. Morningwood was really sort of out of my comfort zone. I love rock music, but my first instinct isn’t to sing rock or pop. It was great though, as I learned how to perform a rock show, which is I think the best type of performing that you can do. Especially when you can bring that energy into a soul show.

What made you make the decision to go this route?

I think Morningwood reached its peak and I think a good quality is that you should realise that and move on. If you’re not happy doing something, or not successful, then it’s time to go for something else. So, at that point, it was a ‘s*** or get off the pot’ deal.

I wondered what’s the point in doing anything if it’s not what you want to do, especially in an entertainment field. Unless I’m making a s*** load of money or there’s something else that convinces me, I might as well go out swinging doing exactly what I want to do. If people don’t like what I want to do, then I probably shouldn’t be doing it anyways.

The album’s got this fantastic, big, sound to it. What was that like to produce?

It was really hard to find the right people to work with. I got super frustrated after I started trying to find compatible people. I met with a lot of duds, kissed a lot of frogs.

The first guy I found was Rob Kleiner, he wrote with Cee Lo, but I met him through my husband [Jimmy Urine of Mindless Self Indulgence] as he was a guitar player for his band when they went on tour. On a whim I texted him when I was honestly ready to quit music. I’d written a letter to everyone saying “I f***ing quit!” because I thought it was impossible to find people I could work with and understood that I wanted to make classic, upbeat, sixties style music but have it be really modern sounding. I wanted it to sound like it was made in 2012 and nobody understood that, it all sounded like it had been made in a garage in the 60’s.

That production was just as important as the songs to me. So I met Rob and he totally got it, so we made it kind of hip-hop. I always say that instead of it sounding like standing in front of Phil Spector’s Wall Of Sound, I wanted it to sound like you were in the middle of his Room Of Sound.

If you were driving, when you’re sat next to a guy listening to a hip-hop record you hear the bass coming out. I wanted it so that if he heard my record doing the same, he’d give you a nod and think you were listening to hip-hop. It actually happened to me as well when I was listening to the tracks though! I check all the songs in the car and some guy pulled over and honked at me and I was like “DONE! Finished” (laughs).

The album’s gotten some great reviews in America, is it good to see how well people are responding to the real you artistically?

It’s nice to know that people like what you believe in. I can’t exactly remember who it was who said it, but whenever you first start out being an artist, it’s because you have a certain level of taste and you want to create something like that, but it takes a really long time for you to be able to do that. So you just keep working and working and working at it.

Then at a certain point you begin to start creating the level of something that made you want to become an artist. That’s what this felt like for me and it’s nice to have people like it. The thing that’s the most gratifying is that they say this is what seems the most natural and that it’s really me.

So why the big hold up on getting it over here then?

(laughs) It’s just a money thing! It is my biggest dream. I have three dreams professionally. One is to play Saturday Night Live, one is to do a Bond theme, but I totally understand Adele doing it, she’s a national treasure and the third is to come and play all the festivals in the UK. I absolutely love it there, it’s one of my favourite places in the world.

Hit two birds with one stone then, just come over and play for the Broccoli’s.

Well, Daniel Craig is actually a big fan of Morningwood, which is really funny. He said it in Vanity Fair a couple of years ago, but it was after we’d broken up, so I was sat there going “You’re really late to this party”. I’m such an Anglophile though. I love everything British, from the music to the movies to every TV show. I love pub food, I love the style, Topshop, I love it all.

The only thing I’m upset about is that I always thought I’d marry a British man. That’s the only downside to my husband; he doesn’t have a British accent. He does the s*****est Dick Van Dyke accent! He’s doing it right now! (laughs).

Now, is ‘Real Girls’ the third part of the trilogy started by Baby Got Back and Fat Bottomed Girls by Queen?

(laughs) I love it! I just tweeted about Fat Bottomed Girls to Brian May, as I never knew he was the one who wrote that. I always thought it was Freddie. Even though he wasn’t super into ladies, I thought he was just appreciating a full figured woman, but I was so delighted that Brian May had wrote the whole thing. I said it’s the best song ever about fat bottoms. I would be honoured to have me in the trilogy, if they would have me.

There’s a rather worrying amount of detail in ‘Pop Pop Bang Bang’, where did that knowledge come from?

I love shooting guns, I think it’s a great sport! I have a pretty decent aim, but mainly I just enjoy it and think it’s something you should know how to do. Like driving a car or ride a horse and how to deliver a baby, I don’t know how to do that yet and fly a plane. Oh, and swim! So many things, but shooting a gun is one of them.

So, what can you tell us about Fuktronic?

I don’t know how much I can say about it. It was really fun though. Serj [Tankien of System Of A Down] My husband, they call him Jimmy, I call him James which is funny, they just did this awesome project together. It’s this fake gangster film and they asked me to play the lead female in it.

So I don’t even sing, I just talk though it and I have possibly one of the s*****est French accents in the world. (laughs) I think that just because my name’s Chantal that I can play a French girl and I have this amazing accent.

Whenever James has female voices on any of his records he has me come in and do a bunch of different characters.

We saw you Tweet about it, but what were your thoughts on Beyonce’s Super Bowl show?

I loved it! To me Beyonce can do no wrong, she’s a triple threat, a classic f***ing star! Nobody beats Beyonce to me.

When we first signed to Capital Records with my old band Morningwood in 2006, we got a really good advance, but I wanted to spend the whole thing, and we’re talking a couple hundred grand here, blow it all on one f***ing duet with Beyoncé (laughs). I just didn’t care if the record was one song; I just wanted to do a duet with her.

Obviously, nobody went for it, but I love her. I think she’s the classiest lady. She can sing, dance, act, I love her!

So, what’s the plan going forward then?

I’m shooting a video tomorrow. It’s for Real Girls and I’ve been putting it together for the last couple of months. It’s a real low-fi, organic video and I’ve been wanting to do it forever, but I was inspired by other people’s YouTube clips of my songs.

I don’t want to give too much away, but there’s a lot of exercise involved and a lot of dancing. I’m not an amazing dancer, I mean I can move, but when it comes to choreography, I’m not awesome. It’s going to be incredible and fun. That should be done in the next month, as well as a remix James did for me of Honey Honey, that’s going to come out in the next week or so.

I really just want to come over to the UK though, that’s my dream! The biggest problem is though that I have an eight person band! Skrillex is a genius, he has himself and backpack! You understand why he does that.

We’ll just have to come up with an excuse to get you over here then.

Please do! I put on a great show, I love it over there. I just want to go to Topshop! Everytime I’m there, even if it’s just one day and I’m flying through, I make an effort to always go Topshop. I lived in London for four months in Notting Hill and it was the best experience ever.

Chantal Claret’s album The One, The Only… is out on April 1st. 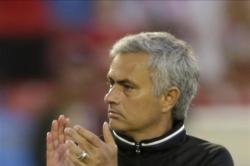 United Triumph Over City in Houston