Charlene Soraia shot to mainstream fame last year when her singing a cover of Wherever You Will Go on a tea advert saw her go to number two in the charts.

After a year away, the London based singer is back with a new single in the form of Ghost, with plans of releasing a second album later this year.

To mark the release of the single on March 18th we talked to her about the single, her adventures into the psychedelic and Alan Rickman (although we may have ruined the bowl of Fruit and Fibre she was just about to eat).

So, to start with, what can you tell us about Ghost?

Well, it’s a song. Called Ghost. (laughs) It’s about that feeling you get after you’ve been in a relationship, you think about the other person and get thoughts in your head like ‘They’re not even thinking about you, you don’t exist to them anymore.’ Sadly, I actually wrote it with my ex. We wrote a few songs together before we broke up and they were all sort of introducing the idea of us breaking up. So that was a bit weird when I was recording and now that the single’s out its weird again. It’s nothing I can’t deal with though.

The song’s been getting a great reception, what’s that like for you to hear?

It’s really nice. It’s been over a year since Wherever You Will Go Came Out and I wanted to bridge the gap between that and the content on my first album. So the fact the people really like this song is quite encouraging because I was thinking if anyone would care. I was just that chick off the advert. I’m nobody really; I’m not signed to a big shot label with money coming out of her ears and nose. So I was happy with the things that people have been saying and it was really good to finally get it out there.

The actual song was written about a year ago and I recorded it last summer and then we decided it was going to be the first single. Then I was talking to this guy I’m working with Johnny about loads of sixties psychedelia stuff and the movement of the hippies and comparing the American and English sides. I’m well into psychedelia and prog rock, that’s my bag right there. Then he turned around and said that he knew someone from the Joshua Light Show.

They did a whole bunch of trippy lightshows in America in the sixties and when Johnny said this I nearly wet myself! I was just thinking “Hold your breath Charlene, act really cool” and just ended up squeaking ‘That’s fascinating Johnny, tell me more…’ He was just there saying ‘Wouldn’t it be good if we could get them to do your video’ and I was just squealing like an old fashioned teapot boiling. I felt like that!

Within three days he’d sent the song to his friend Seth and he was so into it and it wanted it to happen. So we just ran over to New York for a couple of  days making this video with him. His wife is Ana Matronic from the Scissor Sisters, so she did my makeup and hair. She’s amazing, just so beautiful. It was done in their house; they’ve got a film studio right there.

It was just so nice to be able incorporate the lightshow element into the new album; I’ve been into them for years. On my first album Moonchild, the picture was this long exposure, night time shot playing with light. That reflected what that album was, it was really dark. It was great to be able to bring the psychedelic element into the new album and to actually make a video with the people who pioneered that? I was just kind of awestruck, it was really weird in the best way. 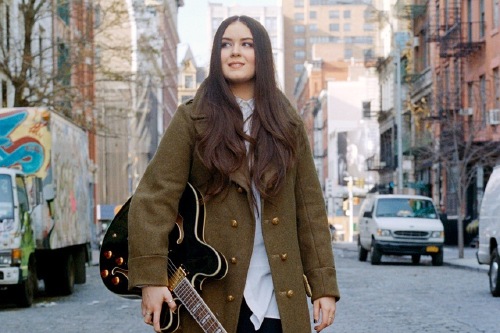 So how goes work on the album?

Literally today I’m going to be singing the last song on the album and then it’s just a couple of tweaks and then it’s ready. So it should be coming out around June. I think June 23rd sounds like a good number, a healthy sandwich of a number.

So, a little birdie says you’re a bit of a David Bowie fan. Why is that and what are your feelings about him coming back?

Bowie was my saviour. When I was eight years old and I discovered David Bowie, that’s when I knew what music really was. His music takes me to another world, and that’s what music is for me, it’s a place. That’s what I love about it. I would be honoured if I could bring people to different places in my music. The fact that Bowie’s still going at it is great, I don’t even care what the songs are like, I just love him. I so respect the fact that he’s still making art. That is an honour in itself.

It’s funny you ask actually, I was listening to Bowie last night. I was listening to Station To Station, then Diamond Dogs, then Space Oddity and I went on a right journey back into my early years because I was so into David Bowie at school I used to get bullied about it. And for liking The Beatles. When I started liking Pink Floyd, that’s when people stopped caring (laughs).

All the other 14 year old girls were just asking ‘Why’s she listening to this stuff’? It was weird being at school listening to old music and wearing vintage clothes. People used to come to me and say ‘Did you get your clothes from a charity shop’ and me just going ‘No, they’re different!’

Now we’ve just got an image of you going to school with Bowie makeup on.

Oh no! I used to a fitted velvet jacket to school and cut my ties so they were flat at the bottom. I used to think I was so cool, but now I just think ‘No, Charlene, were was not a mod!’ (laughs). I was quite into mods back then, then I discovered the psychedelic and left that all behind as that was what I’d been searching for. Psychedelia is the holy grail of music to me.